You are here: Home1 / Description

This may be the first car memoir – a car revered for its international racing performance and artistic mystique – the first Ferrari 250 GTO, born in Italy in 1962.

It is also the memoir of a man, himself unique – Larry Perkins, a rocket scientist /car racer /artist. His stories chronicle how The Car (a.k.a. “Sophia”) pops in and out of his life. These events, and the people associated with them, create a series of full circles in their shared journey.

Full Circle: the past becomes future becomes past, illuminating words to the famous song… “When Everything Old is New Again”.

Sophia and Larry had an on-again off-again relationship – an “affair” so to speak – for over 50 years. They found each other in 1963 and formed a surprising dynamic of man-machine synergy. Life was fast and furious, fun and full of trophies. When it seemed destined to be over, Larry sold the Ferrari in 1966 for a mere $3600. The racing duo lost track but were re-united and then parted again. Finally … unbelievably … Sophia found Larry when they were both a little older. With the spark alive, their racing history was re-born in a most spectacular way. Each was transformed by the other.

The memoir starts with a man searching for the perfect race car and develops into a previously unrecorded history of s/n 3223 GT with racing tales. Larry and his wife, Petra, tell of an irresistible GTO attraction and adventures during the exciting era of ‘60s sports car racing. (Petra first saw the Ferrari at a memorable race with a fiery crash at Sebring, Florida, when she was 15, but did not meet its driver for 15 more years.)

The authors show the exhilaration of key races and an anecdotal chronology of 3223 with photos, some never seen. They examine what a race driver is really like, the attributes of a highly competitive personality, and the unrelenting dedication to Winning. After all, it was not easy for a small privateer – someone who had started racing relatively late in life – to compete with the likes of racing champions Phil Hill, Pedro Rodriquez, Mario Andretti, and Dan Gurney.

The book emphasizes the value of teamwork.  “Doing the impossible” – in racing or rocketry – demands the best of humans working together to render perfect machines. This is an intimate account about the people who made The Car what it ultimately became.

How did this car acquire its timeless aura of mystique?

How cool is it to drive such a powerful and exquisite piece of machinery?

What happened to Larry?  When, and where?

And best of all, Who made it happen? 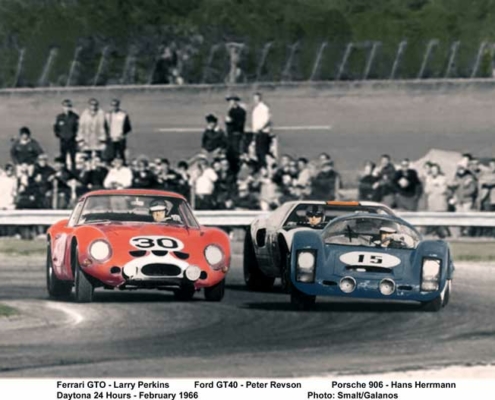 Battle between Larry and Hans Herrmann in Porsche 906 and Peter Revson in GT-40. 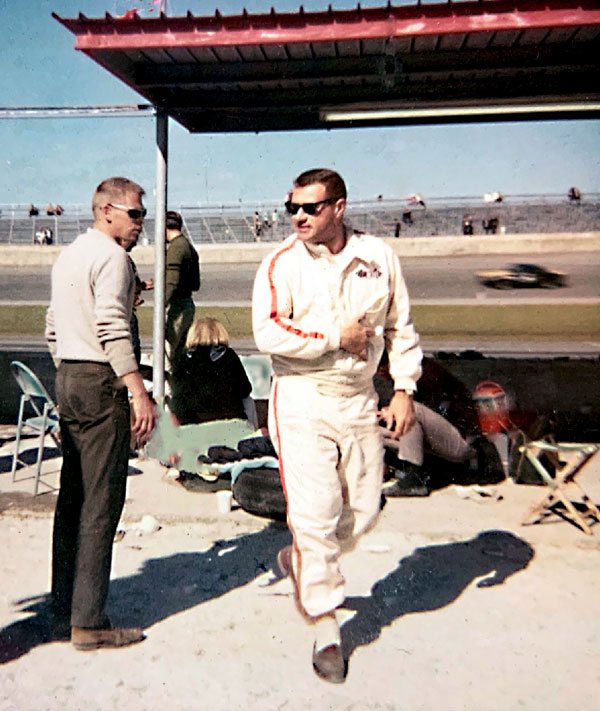 Larry Perkins at Daytona 24 hour 1966 before his big race. He’s wearing one of the first Nomex fire suits.